Emojis Took Over The New World!

19 replies to this topic

Great update. Now can we remove medal spam to make place for emojis?

EDIT: Why there is no cat emoji?

You really want to make something nice of it ? Add countries flags, let alliances make their own flag and put them in the emojis

In Beta and V1 the interface wasn't so annoyingly spastic yes.

Add a title attribute with the emoji's code so when the user hovers the cursor over one, they can learn how to replicate it.

In Beta and V1 the interface wasn't so annoyingly spastic yes.

I was being sarcastic

The economy is almost non-existent. The military module has almost no strategy and no actractiveness for new players. The division system is deeply flawed. The political module sux. There are MAYBE 10 newspapers in the eWorld that are worth reading. The only thing keeping people in this game is the comunity, such as it still is. But I doubt it will be able to keep us much longer here.

You had a great ideea, and a very nice game, and you turned it into something that I would no longer invite any friend of mine to join.

You had a game with great potential, and you had interested players that gave you a ton of suggestions that could improve it. You did nothing with al those ideeas.

The game IS dying, slowly, but surely. You could still save it, if you did something about the problems it has.

And you input emoji...

What is wrong with you, people ?

I think I found a major bug. 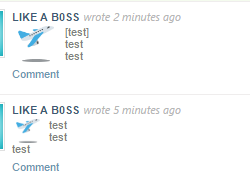 Hmm... [something] makes the emoji 3 lines big. Any way to make my posts more clickbait without using []?

Hmm... [something] makes the emoji 3 lines big. Any way to make my posts more clickbait without using []?

Putting an emoji on its own line after writing something will make it 3 lines long. Might work if you give it its own line before typing other things too.

Also tagged with one or more of these keywords: update, emojis, fun