30 replies to this topic

Terrains attack strategy is selected by the country attacking the region (the resistance force is considered the attacker for resistance wars). Officials have access to the strategy panel from the campaign map (for both current and past campaigns).
During a round, all 4 ground divisions will fight on the same 2 terrains. The next round will be fought on the next terrains defined in the strategy.

A valid terrain strategy must include all the terrains available. Terrain strategies can be set as default (used to determine the first 2 terrains), or changed for a campaign in progress(for future rounds).

Air battlezones do not have specific terrains.

Terrains used for all ground divisions:
Round 1: Industrial & Urban
Round 2: Suburbs & Airport
Round 3: Wasteland & Mountain
Round 4: Beach & Swamp
Round 5: Hills & Jungle
Round 6: Forest & Desert
Round 7: Plain & Mud
Round 8: Industrial & Urban (repeat)

The country-specific Legend Bonus (10% per level) will not be available when fighting in terrains (military rank points gain will be impacted as well).

Only Deploy mode will be available for fighting in terrains.

Max hit mechanics for terrains will be based on the skill of the terrain and not on the total strength.

As bomb damage is not dependent on strength, they will keep their regular values regardless of the terrain type.

Citizens will not be able to fight in non-native division’s terrains if they don’t have an active Maverick Pack enhancement.
True Patriot medal progress on terrains will be based on the terrain skill.

The battlezone that has the highest cumulative damage (attacker and defender) for a division, will gain epic status (2 prestige points per 10 energy spent). Along with it, the other 2 battlezones of that division will also gain the epic status.

Battlezones can also achieve epic status via the regular mechanics, by surpassing the epic threshold (the other 2 battlezones will also gain epic status in this case).

ok but what about bots, traded accounts, multies? when are they gonna get banned? 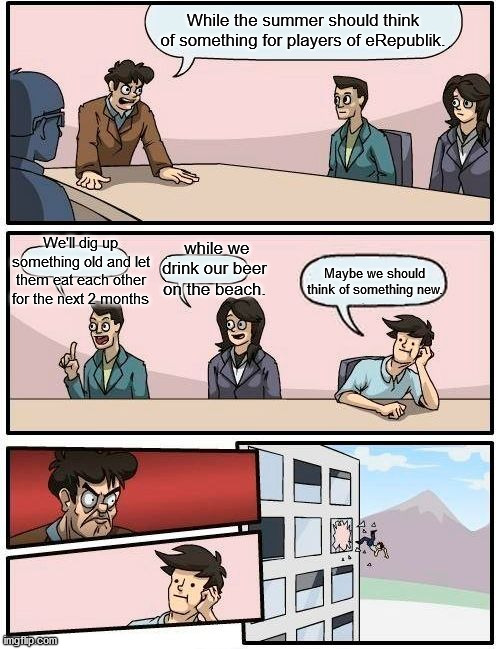 Awesome job! Finally an event which make each player relevant and max hit is achievable for players who have trained for a year. I like this.

should be read as B

Thanks for the event.

High strength players are farming gold the whole year and everyday, while those with low strength rarely has a chance to do it in D4 ground battles. Don't listen these bunch of cowards that uses a traded account and thinks they are in the right to complain.

Also, i suppose a few players that joined in this game in the last 2 years spent more money than some of these high strength players. It's time now to show more consideration for these players that gave a chance to this game even knowing that the game is very unbalanced.

Maybe we could change Daily Orders more than 5 times a day to cope with the multitudes of terrains?

What is this deployment nonsense? Let me fight regularly.

Your max hit in the standard battle zone remains unchanged.

Cats are ok, I was impressed by a Maine coon recently:

Either get rid of Deployment or let me set to how many kills I want to get.

When I fight for Freedom Fighter medals, which I have 1000+, I want to kill either 25, 50, or 75. Deployments don't allow me to kill the number I want. It takes me 5 minutes to Deploy multiple times just to hit the number I want to hit.

Either improve it or get rid of it.

I am Division 1 and cannot fight in terrain battles due to not being able to use the deploy option at 35th Level and lower.

Why do we have to ask for a working game?

I am Division 1 and cannot fight in terrain battles due to not being able to use the deploy option at 35th Level and lower.

Why do we have to ask for a working game?

The level 35 restriction has been removed. You should be able to deploy now

Maybe I've missed it but... what is the point system for this event with multiple terrains and air at the same time? how many points per round and how are they distributed.

Maybe I've missed it but... what is the point system for this event with multiple terrains and air at the same time? how many points per round and how are they distributed.

During the event each round of a campaign will be disputed in both air and ground divisions simultaneously. Each division will consist of 3 distinct battlezones and in order to win the division points a country needs to win 2 out the 3 battlezones.

For campaigns started during the event campaign points will be awarded to the round winner as based on the division:

Way to ruin the economy even more, Plato.  It's pretty obvious you never consider consequences for your player base at all when you do things like this.

Way to ruin the economy even more, Plato.  It's pretty obvious you never consider consequences for your player base at all when you do things like this.

Please be assured every event or game change is thoroughly analysed to consider impact from all lenses.

Why should anyone be assured of anything?  Updates are few and far between and, let's be honest here, the track record for implementing new "features" is mixed at best.