Esplanada dos Ministérios, Bloco L - Brasília
Tuesday January 5, 2021, day 4,795 of the New World.
Dear eBrazilian citizens,
The Ministry of Education is updating several eRepublik guides in its catalog, today we will talk about the Battlefield Guide. Let's go to the guide!

TABLE OF CAMPAIGNS
Before we go to the battlefield, let's understand the picture of the campaigns better. Such a page will appear by clicking on the written part Wars in the upper stripe.

In this photo we can analyze several different battles and we will explain them: 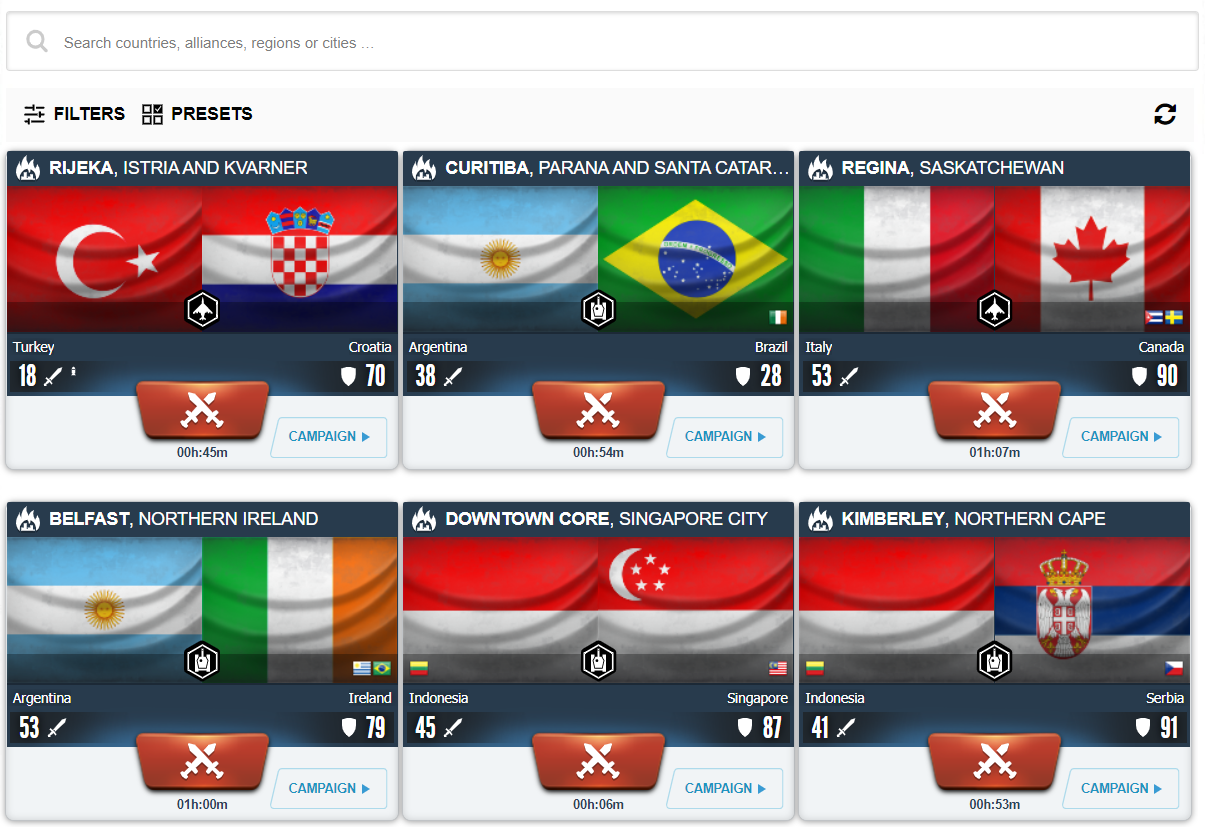 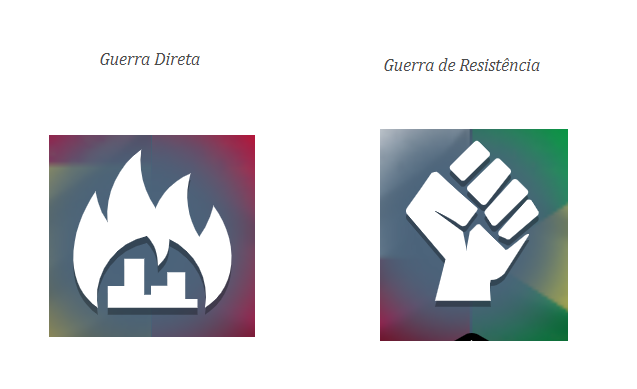 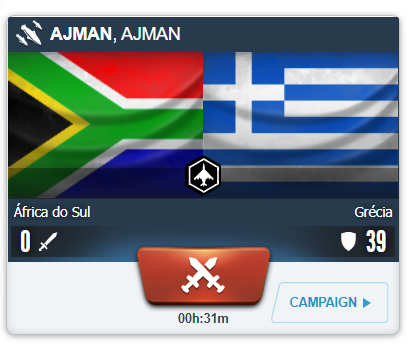 Indicates, in the middle, whether this is a land or air round: an airplane, if aerial, or a tank, if terrestrial.
In the corners, the score of the battle. The shield and sword icons indicate who the Attacker (Argentina, in the example) and Defensor (Brazil) are.

Indicates who the countries are, in addition to their allies in the battle (if any). The red button takes you to the battle, and below the battle timer.

In this filter, you can choose the type of attack you are looking for.

Here, you can choose whether you prefer Air or Ground Battles.

Here, you can choose the progress of your battle, either towards an Epic, or in relation to time.
Waiting: Your division has finished the battle, but some other division is missing.
Fresh Battle: Battles that started within 30 min.
Early Battle: Battles between 31-59 minutes.
Late Battle: Battles over 1 hour. 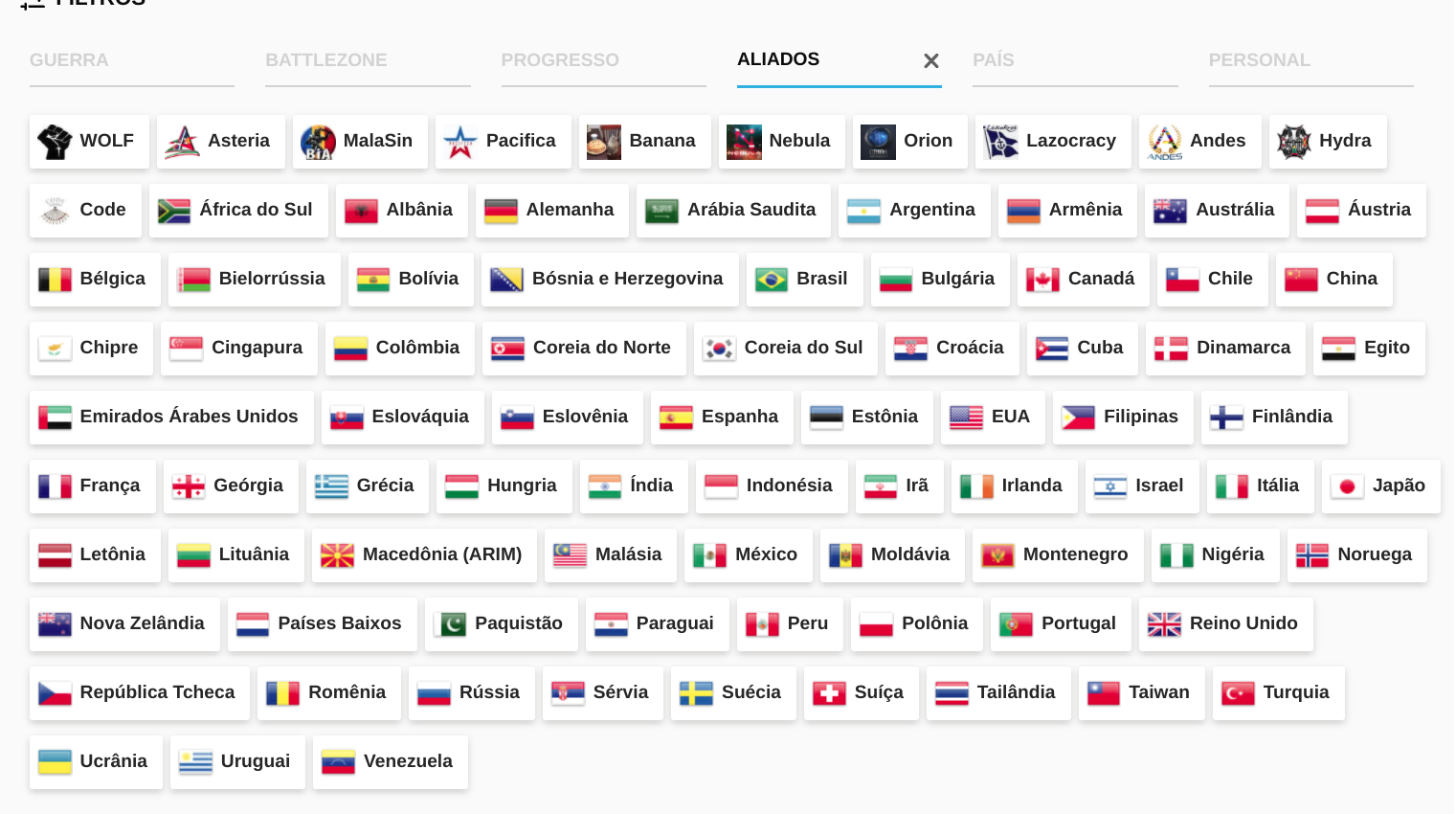 In this field, you can choose the Alliance or a specific country + its allies. 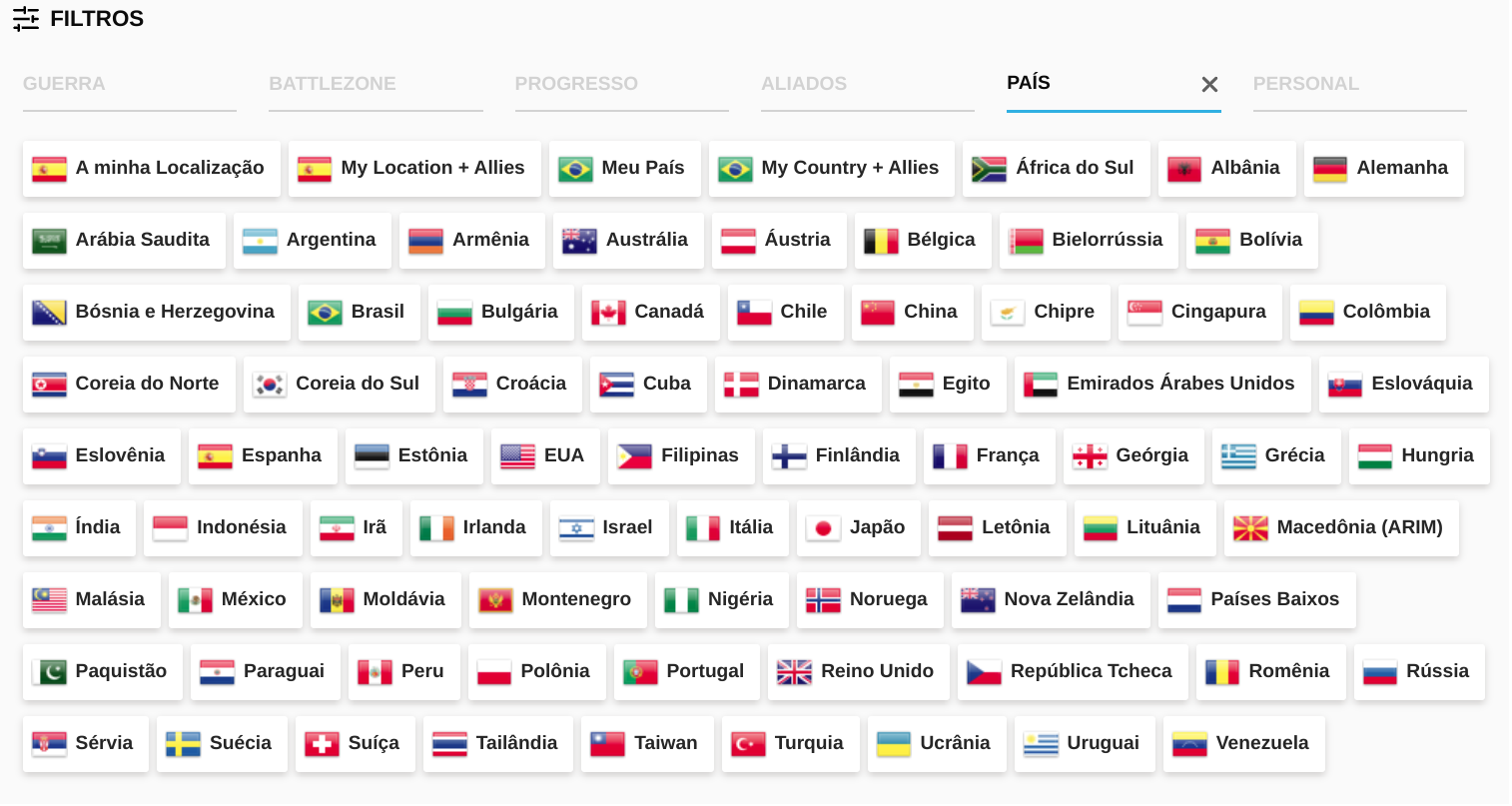 Unlike the other, here you can choose both the country in which you are + allied, as well as your country + allies, in addition to any other country, without allies.

My Contributions: Battles in which you have already dealt damage.
Daily Order: from your MU.
No Travel Requires: To fight without having to travel.
Combat Orders: Battles that have rewards for those who fight in it.
Mercenary Medal, Freedom Fighter Medal and True Patriot Medal: Battles that will help you win these medals.

To remove a chosen filter, just click on the X

LAND BATTLEFIELD
We will start with the most well-known and classic field: the Terrestrial.
IT IS NECESSARY TO UPDATE THE PHOTO (NUMBER 5) 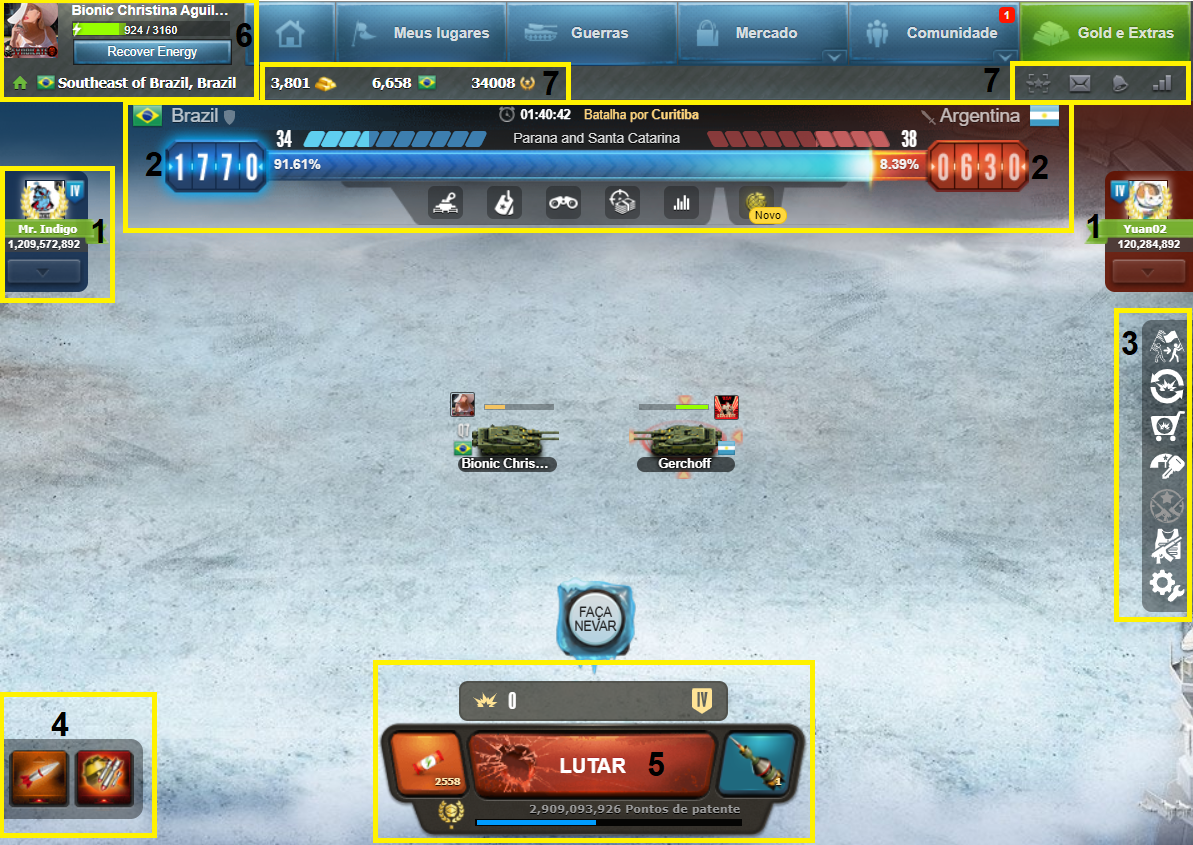 This scenario may seem drastic to some novice, but it is simple and works well. Let's do it by steps:

Player with the most damage in the division you are in.

In this part we have some information that is straightforward and does not require very detailed explanations, such as the name and flag of the country you are fighting for (blue side of the bar / left) and the flag and name of the opposing country (side red / right); The place where the battle is taking place; The time that has passed since the round started; the bar that identifies the points on each side (percentage, etc.) and some buttons below that we will explore more deeply: 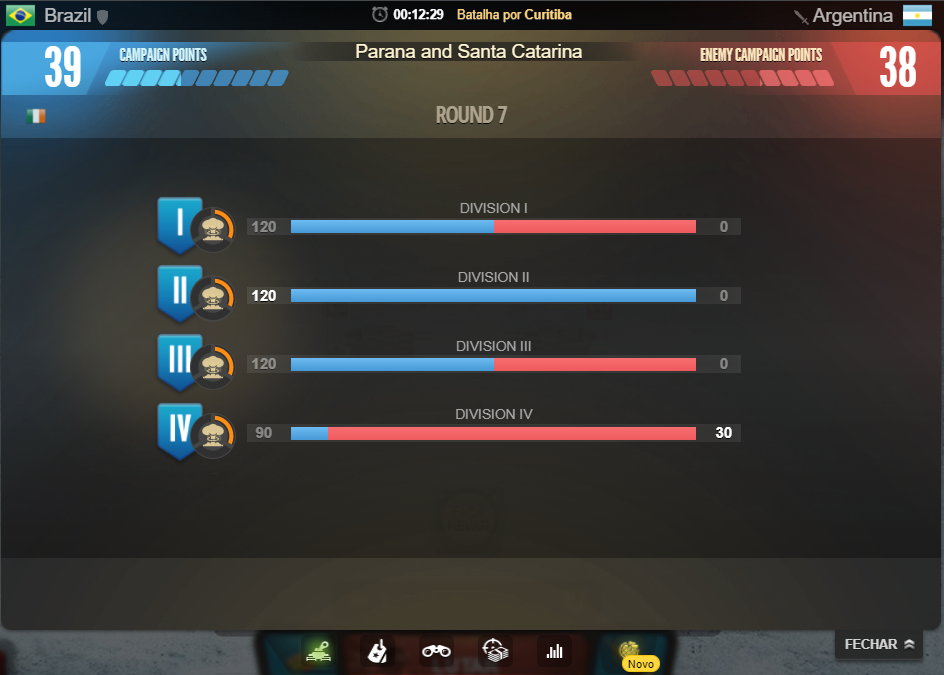 Let's go to the next button:

In it we have the statistics of the fighters on the side of the war (possible to be located by the flag that is placed on opposite sides) by damage (Damage), by deaths (Kills), by round (statistics of all rounds) and by division (indicated by the Roman numbers in the pentagons). 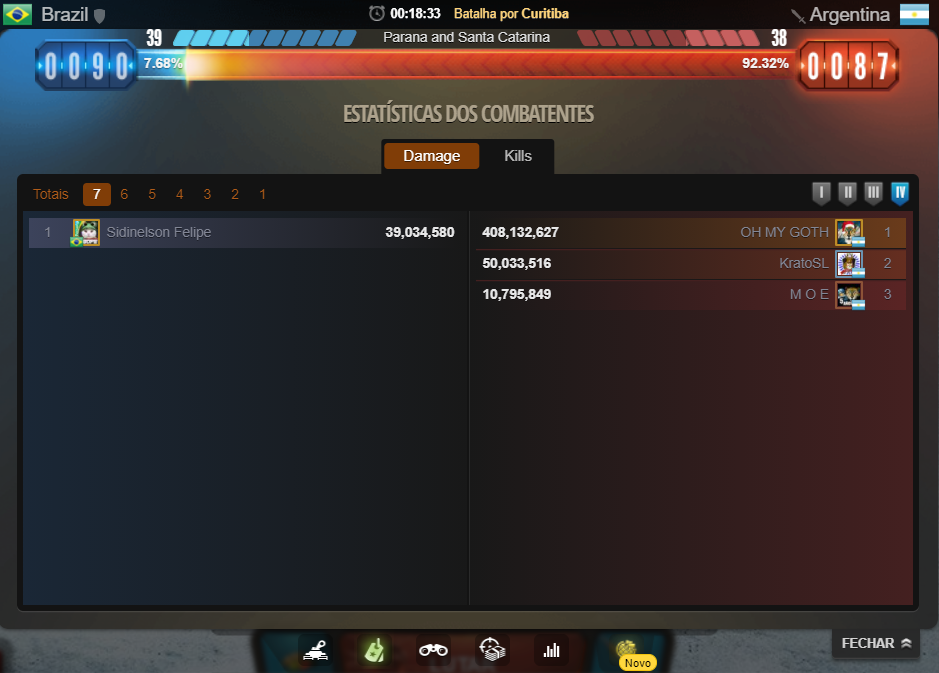 Following the tabs, we have the next button:

In it, in free translation, we have the “History of War” where you can see the other previous battles between the two countries involved, in addition to other additional information, such as the day and the place of each one. 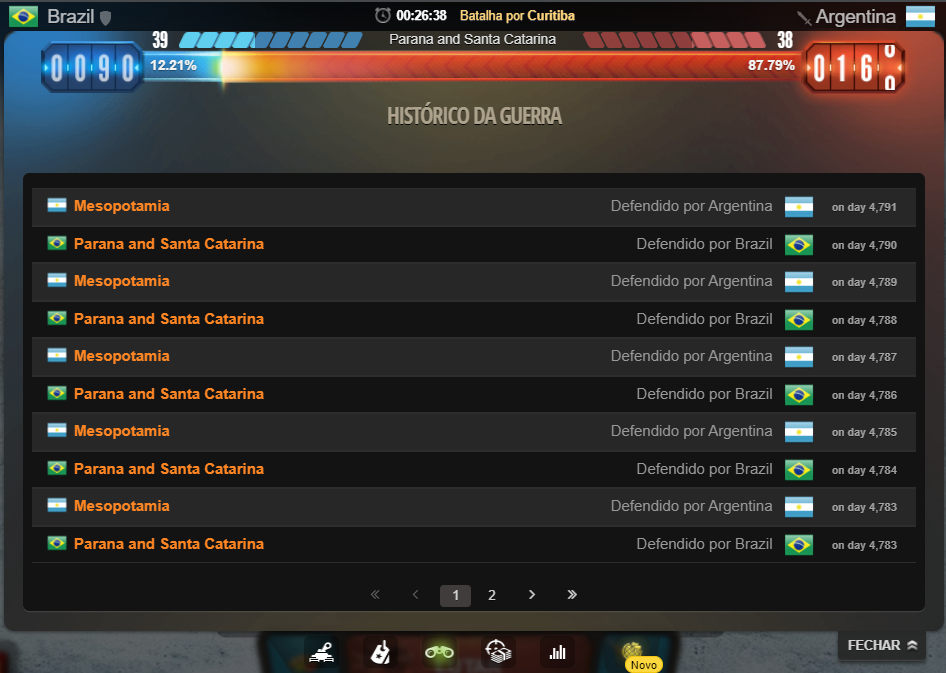 Following the options we have the Combat Orders:

Combat Orders or, as we say, CO. Basically, CO is the money that some Military Unit or Government makes available to eMundo players to fight for money. The greater the damage, the greater the amount of money.

NOTE: It works only in Deploy mode and gains automatic. 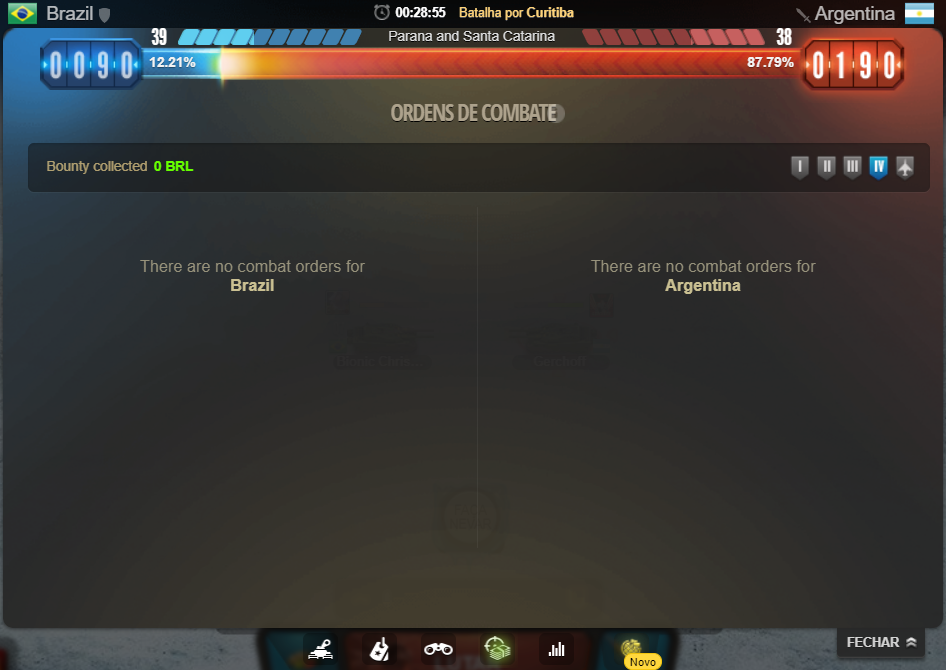 The penultimate option is Battle Statistics.

In it you can see the influence of the damage done by the Attacker or Defender in all divisions in real time. 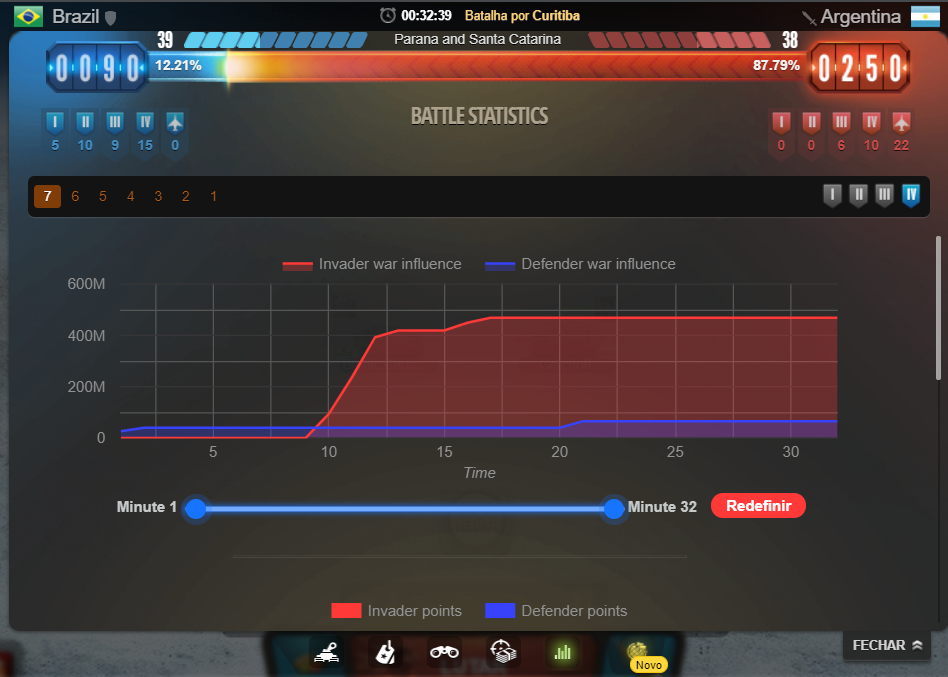 In it we can see buttons to choose the side and the division, use the deploy mode (automatic fight), supply store to buy EB and booster, change the vehicle icon, participate in guerrillas, guerrilla inventory and options and filters of the field. battle.

In the lower left corner you can see your damage amplifiers and bombs available for use.

Here you have access to the button to FIGHT in the middle; restore energy / use the food in the tank on the left button (the action is only possible if the button is colored); see your patent points; your damage in battle just above the fight button and, finally, by clicking the right button you have the option to switch weapons (there are nine available and to use them you have to have them; you can see which ones you has the brightest tone, but if you can’t distinguish it don’t worry: By clicking on a weapon you don’t have you are directed to the market)

Indicates your name and your energy bar (when you hover the mouse they give you information on how the energy can be spent and also methods on how to restore it). Basically that part is about you.

Easy to understand: you see your golds, your BRLs, your prestige points and, in the upper right corner, you see the available missions, your messages, your notifications and the possibility to see your MU and World statistics.

In addition to the buttons shown we have:

You in the middle of the battlefield and your opponent (the name, the avatar and the flag of the country where he is located are shown)
NOTE: Apart from the eCitizen with whom you are fighting, it is possible to see the profile of the other players who are working on the field, allies or enemies, just by clicking on your figure. 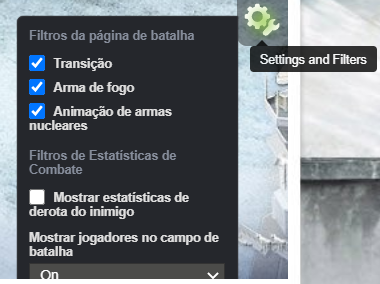 Some settings in the lower right corner regarding the battlefield settings and filters.

It follows the same rules as the terrestrial field, with small distinctions. Let's see:
We have no difference in division in the sky, generating small changes between the fields. Notice the difference between the fighter statistics, on the tab that indicates the divisions on the ground floor and how it differs on the air battlefield:

In addition, there are 5 types of weapons available on the market (Q5), so you can use only those (in addition to the NW [No Weapon] which is free and infinite).

Also tagged with one or more of these keywords: Battlefield Guide, Guide