I Think It's Time For Medal Posts To Be Removed

26 replies to this topic

The whole page is spammed with medal posts. It's not a big deal anymore, that someone has won a battle hero medal. From every 10 posts, only 1 is not a medal post. Remove them or maybe limit them to 1 medal post per day.

I voted Yes, I regularly unfriend BH Hunters due to their spam.

Maybe limit them to CH posts.

Also Guerilla posts have to be removed. If Guerilla fights will be useful one day, every Minute there will be at least one post in your feed...

It is just pure spamming of a useless kind.

There should be a checkbox to filter medals you don't wanna see out. My script does that but it would work much better if it were implemented server-side.

It is just pure spamming of a useless kind.

You can unfriend the spammers Tommot

Don't cry because it's over, smile because it happened.

You can unfriend the spammers Tommot

there are other reasons to have someone in the friendlist besides the feeds.

Also it is easier to find someone when they are in your list.

Please remove it or set the same restriction that other feeds (10 minutes).

Useless feature. No positive aspects. Yeah it's cool to show off a medal , but one that is actually hard to earn.
A filter will be best, I doubt it's hard to just put a checkbox somewhere which filters off the medals and leaves you only the important messages of your friends.

Set up the 10minutes limits could also help to avoid mass spam of BH. 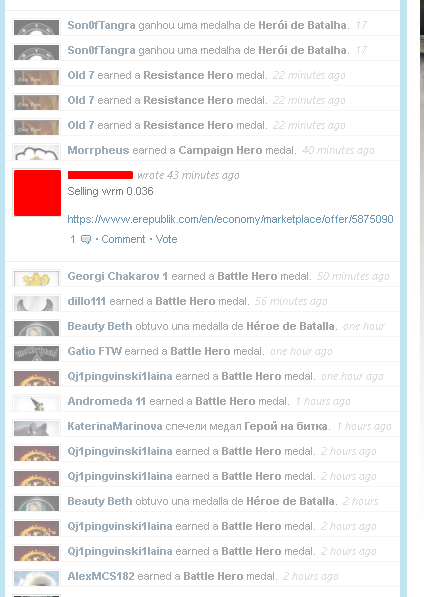 This is how my feeds look with a script now

Just a man, and his will to survive.

Just turn them all off.  I don't really care how many medals other people are collecting.  It is just irritating that I cannot see actual shouts from real people in the shout feed.  Instead, I have to look at a bunch of automatically generated spam.  God knows eRep is irritating enough in other aspects.  This would just be one less thing to be crabby about.

Voted ye, BH's don't mean jack these days. No point showing them off.

Voted yes. But it's a "glory" feature, so I guess Plato won't remove it.
If buyers couldn't brag "hey, see how cool I am", they would spend less, for sure.

The rule of posting every 10 minutes can be applied here to BH posts.

Also tagged with one or more of these keywords: medal, shouts, posts